How Does Barnes Begin Their Hornet Removal Service?

Each Barnes Wildlife Control hornet removal service job begins with a survey performed by one of our courteous, professional staff members. Upon arrival, your hornet removal service technician will perform a full property inspection. He or she finds all possible entry points as well as any nesting and breeding sites. Furthermore, once the inspection is complete, we form a custom control plan which suits your specific needs.

Your hornet removal service technician will then guide you, step-by-step, through the removal process. Also, our access to top-of-the-line products and years of combined experience and education makes us the best choice for your hornet removal needs.

So, if you see a hornet nest in or around your home we recommend you not approach it. Leave this task to a trained hornet removal professional’s training. Barnes Wildlife Control is the #1 hornet and insect control company in Dayton and surrounding areas. Call today at (937) 340-1867 for Barnes Wildlife Control expert hornet removal service throughout Southwestern Ohio! 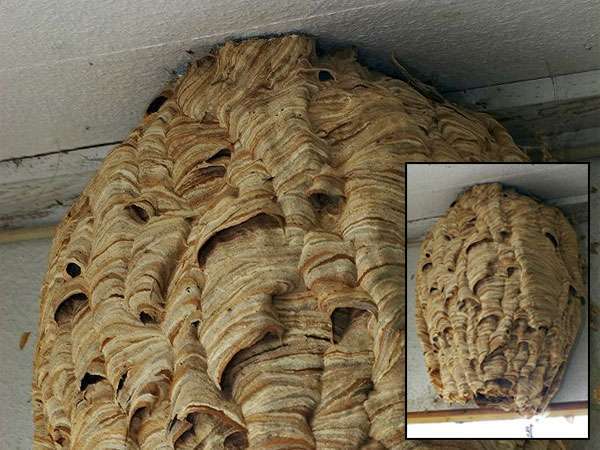 This is what a European Hornet Nest can look like. Barnes Wildlife Control Hornet Removal Service says “Please stay away and contact us!

Did you know that hornet colonies can range in size, with most containing 400 to 700 workers per nest? Hornet nests can grow in lengths two feet long and constructed of a paper-like material. The worker hornets produce the paper-like material by chewing on wood which mixes with a particular starch in the hornets saliva. This dries down into the papery substance seen on the hornets’ nests. Generally carnivores hornets feed primarily on flies, spiders, caterpillars, and other types of insects. They will, however, eat many kinds of fruit if available.

A hornet colony will aggressively defend its nest if it appears threatened. Unlike some stinging insects, hornets do not lose their stingers and will repeatedly attack a predator. A hornet’s sting can be very painful and may even cause an allergic reaction in some people. For the safety of you and your family, please do not threaten a hornet nest. Hornets will attack all potential threats viciously which may leave you or somebody you care about with serious injury. If you notice a hornet nest on or near your property, call our trained professionals at Barnes Wildlife Control for top-notch hornet removal service!

The Hornets Of Greater Dayton Ohio

Hornets can be found all throughout southwest Ohio in the summer months, especially in July and August. 22 species of hornets exist around the world. But, Barnes Hornet Removal Service deals with two hornets native to Ohio. They are the bald-faced hornet (technically a yellowjacket) and the European hornet. Hornets pray on flies, spiders, and other insects which are nuisances to humans. Although they serve a necessary role in the ecosystem, it is important that you protect yourself and your family from hornet activity. Hornets can be very dangerous to humans if left unattended. Also, as an aside, please note All hornets are wasps, but some wasps are hornets.

Bald faced hornets have white and black coloring. It has a white or “baldfaced” head, hence its name. These hornets also have three white stripes at the end of their bodies. The European hornets tend towards brown with orange markings, and build their nests in natural cavities like trees, stumps or in cavities within buildings. 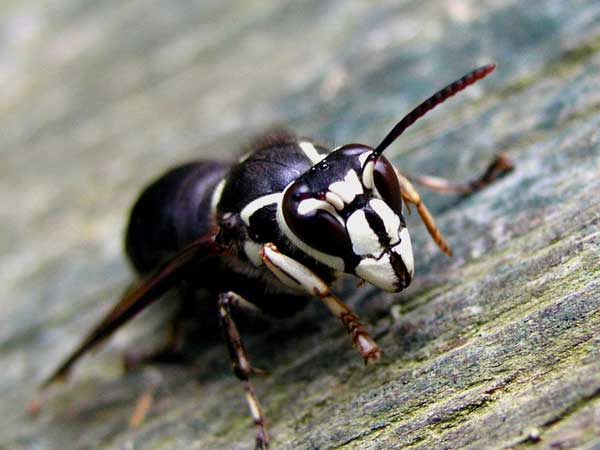 Although not a hornet but called one, bald-faced hornets aggressively defend their nest by repeatedly stinging invaders. They build large hanging paper nests.

Hornets can cause any number of problems for homeowners in the Dayton area. Often times, a hornet colony will look around residential areas for soft wood to use as material for their nests. Also, they are known to damage trees as well as wooden structures while creating this material. But, it is unlikely they will damage your home to the point of becoming structurally unsound, but hornets can cause significant surface damage. Sometimes, the aftermath of a hornet infestation requires property repairs due to the surface damage they cause to wood.

Another, more pressing, issue with hornet infestations is the potential for hornets to invade your living space. Hornets may build their near or attached to your home. This allows them direct access to windows, doors, and crevices. Once inside, hornets may raid your pantry for easily accessible, sugary foods and possibly even begin to nest in a remote location such as an attic. If you notice hornets inside of your house or even collecting in areas near it, please contact a qualified pest control service right away. Hornets will not leave on their own and you certainly don’t want to appear as a threat. So, get Barnes Wildlife Control, Greater Dayton Ohio’s Leading Hornet Removal Service. Give Barnes a call today at (937) 340-1867 for quick, expert hornet’s nest removal! 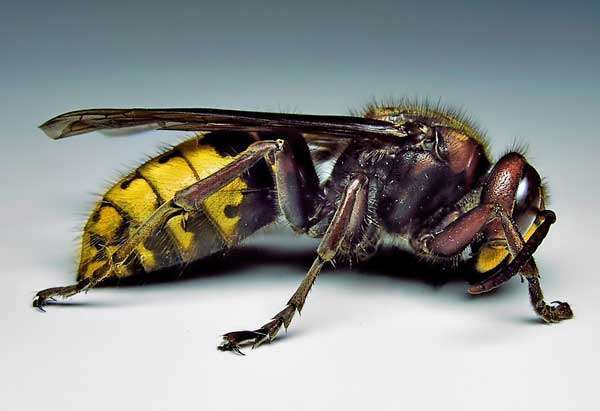 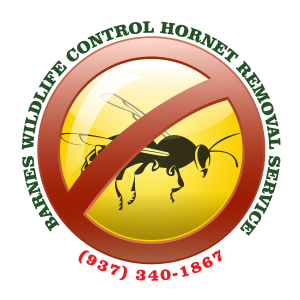 Barnes Wildlife Control Hornet Removal Service says “know about the main difference between a hornet and a wasp.” In particular, the hornets size. For example, the only true hornet in the USA and Canada, the European hornet, grows to be approximately 1-1.5 inches long. The maximum size for a paper wasp or yellow-jacket is 1-inch and can be smaller. Also, hornets, like wasps, have six legs and two pairs of wings.

The European Hornet – Notice The Hair 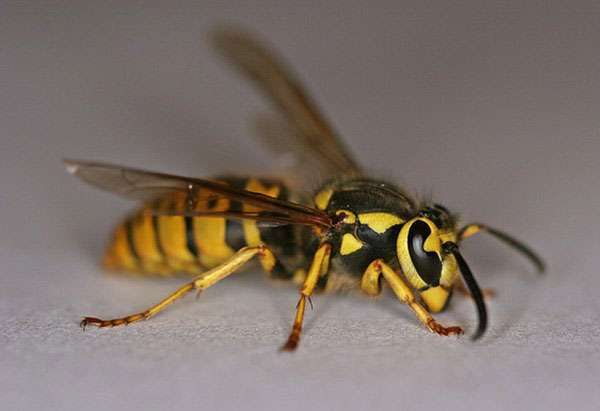 The Yellow Jacket – Notice No Hair

Hornets have incredibly painful stings. Hornet stings are more painful to humans than typical stings because hornet venom contains a large amount of acetylcholine. Much like social wasps, hornets have the capability to sting their target multiple times. Also, unlike honey bees, hornets do not die after stinging because their non-barbed stingers which don’t get pulled out of their bodies.

Due to the possibility of multiple stings, this allows for serious injury and possibly one which requires medical attention. Certain people can have either minor or severe allergic reactions to hornet stings. Even a mild allergy has the potential to escalate. If you even suspect having a stinging insect allergy, do everything in your power to avoid contact with hornets.

So, if you’ve had a run-in with a wasp or hornet, it won’t be a great day. Assuming you are not allergic, the symptoms will last a few days, but they will end with the proper care. Just treat a hornet sting, which is alkaline, with vinegar and ice, and elevate the stung area. Also, the less the hornet sting area swells the better you will feel and the sooner you will recover.

To reduce swelling, you can also take an antihistamine (Benadryl) or acetaminophen (Tylenol). These drugs help the hornet sting in two ways.  The antihistamine relieves the itching and burning sensation. Also, the acetaminophen relieves pain. Symptoms will probably last 2-5 days; follow the instructions on the label for dosage. 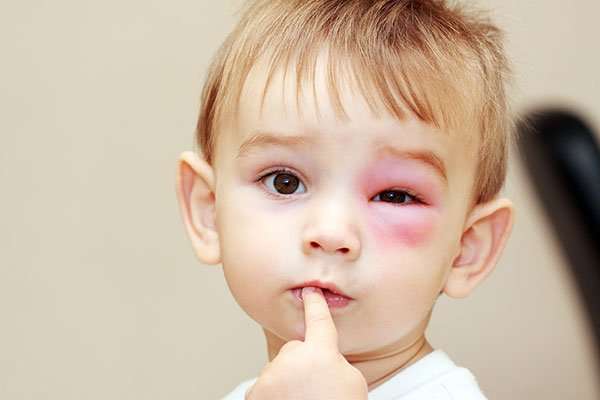 This young boy had a sting around his eye. For a small number of people with venom allergy, stings may be life-threatening. Make sure to contact Barnes Wildlife Control Hornet Removal Service before this occurs with your children!

Hornets Are Ecologically Helpful, But…

Hornets, although helpful to the ecology, can be a major nuisance for Dayton homeowners. When defending their nest, hornets may pose a threat to anyone in their vicinity. Hornet colonies can number in the hundreds with nests increasing in size over time if not handled properly. Not only can hornets pose an immediate danger, but they have the ability to gain access to your home if allowed to reside on your property.

Also, hornets have been known to form nests in walls, attics, and other protected locations within people’s homes. Furthermore, if you notice hornets inside or near your house, be diligent and call a professional hornet removal company right away. What’s more, hornets will remain on your property for as long as you allow them to. By all means, hire Barnes Wildlife Control since you get Greater Dayton Ohio’s Leading Hornet Removal Service Company. Call Barnes today at (937) 340-1867 for quick, effective hornet removal!