Barnes Wildlife Control has the necessary experience, tools, and equipment to help you get rid of the squirrels in your home or attic using our proven squirrel removal service.

Our certified wildlife technicians at Barnes Wildlife Control will remove the squirrels in your attic and determine the best way to seal all possible entry points as all squirrel control situations aren’t created equal.

With our proven methods, we can prevent squirrels and other vermin from returning to your house once and for all, including our 100% Warrantied Service

These squirrels will safely go into our traps through effective trapping strategies and relocate them greater than 10 miles away from your property. Our detailed inspection is essential to ensure that all squirrels trapped in your home get evicted along with squirrel exclusion repairs.

Call us now for fast and efficient squirrel removal and trapping services!

Disadvantages Of Squirrels Getting And Staying In Your Attic Home

Squirrels prominently seek food and shelter during the peak of spring and fall seasons. Like any nuisance animal, they tend to store food for the upcoming winter or even give birth to their young.

They bring inconvenience with their obsessive chewing through wires, wood, and even spray foam insulation, which does not only result in disruption of sleep but could also directly damage the structure of your home or building. Their fecal matter also can soil insulation and may be harmful to your health.

Squirrels have the ability to chew through metal screening.

The Four Squirrels Of Ohio: Red, Gray, Fox, And Flying 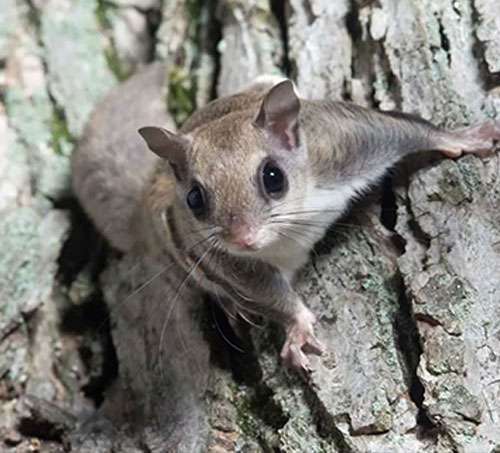 Squirrels are listed in the rodent family and the most problem squirrel calls we receive are for the Eastern Gray Squirrel which are active during the daytime hours (diurnal) and the flying squirrel which are most active at night (nocturnal).

Flying squirrels closely resemble the activity of a bat, but are approximately 3 times larger than a mouse, and ¼ the size of a gray squirrel. Gray squirrels are mostly grey in color and around 17 inches long including the tail they weigh in about 1 pound, but when running in your attic they sound much larger.

Squirrels are active year-round always on the search for food and generally live near walnut, oak, or other nut producing trees and love people who feed the birds. We find stored walnuts and acorns and bird seed such as sunflower shells on about 50% of all rodent and squirrel attic inspections. Squirrels primarily live in trees but have no problem adapting to live in your soffits, attics, walls, eaves, garages, and barns.

Most Ohio squirrels including the Gray squirrels in Ohio have two litters per year, one in the spring and one in the fall and pregnancy lasts about six weeks with and baby squirrels are pink and hairless at birth. The last several years in the Dayton Ohio region squirrel litters average three young and they stay in the squirrel nest for 2-3 months. Photo below shows juvenile squirrels exiting an attic of a Miami Valley home into one of our Barnes Wildlife Control’s squirrel traps.

Our squirrel pest control technicians have witnessed these squirrels jump and glide over 50 feet feet from their nests located inside soffits and gutters. They leap from high vantage points such as roof tops and spread the appendages so the skin of the body can catch air and glide to safety on nearby trees.

Squirrels favorite place to enter your attic is through gaps and vents on the roof of a house, but squirrels can also cause nuisance problems by chewing their way into your home by finding weak or rotted wood. It doesn’t seem to matter if the structure is new or old, if there is potential for a dwelling they will take advantage and often times we find poor construction practices lead to these squirrel inhabitants in the attic or ceiling.

Squirrels have easily adapted to humans. They frequently use buildings as nesting areas. Squirrels love to break into a house and stay in an attic or soffit. They often find a small opening and will chew a wider hole to gain access to the building. They bring nesting material into the home, and make quite a bit of noise scurrying around and caching nuts. They often fall down the chimney flue and make a lot of noise or enter the fireplace. Sometimes they fall down a wall from the attic and get stuck. They often chew their way into commercial buildings or apartments.

Squirrels often enter the attic through the gable vent. Squirrels can cause a fire hazard in homes by bringing in nesting material, and by chewing on power lines. Squirrels can leave behind a lot of droppings and urine in the attic. The droppings not only smell bad, but they pose a biohazard, and the smell attracts new squirrels. I highly recommend attic decontamination services if you’ve had squirrels living in your attic. If you want to hire a pro after you read the below info, check out How much does squirrel removal cost?

Getting rid of squirrels can take on a variety of approaches including squirrel trapping, squirrel damage repairs from chewing and feces in your attic, squirrel prevention and control, squirrel exclusion, and tree removal. We do not recommend repellents as we have found these not to work. 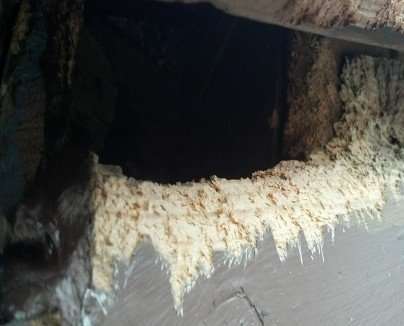 Squirrels Chewed this Hole in Wood Fascia and had complete access to the attic and down inside the walls. Our squirrel removal team was quick to respond.

Why Do Squirrels Love To Live In Attics?

Well, they are protected from predators and sheltered from elements. There are plenty of places to store food and they can nest in your insulation. And squirrels will take advantage of your home’s air conditioning system to stay warm in the winter and cool in summer.

They are perpetual chewers of wood, rubber, plastic, metals, etc. so an attic is a perfect place for them. Squirrels have an obsession with constantly chewing to sharpen their teeth. This can create dangerous conditions when they chew on electrical wires such as Romex Wire.

How To Remove Squirrels From My House Or Attic?

Use a trap exclusion door over the entry hole so squirrels can leave but not return. With this method, you risk squirrels returning to chew in a new hole next to this one-way door trap and causing more damage. We recommend using live cage traps to remove squirrels.

Cage traps are highly effective for trapping squirrels, and we can safely and humanely remove them and release them at our 25-acre wooded office outside Troy, Ohio.

We Often Get This Question: “How Do You Keep From Trapping Every Squirrel In The Neighborhood?”

We intend not to catch any animal that’s not part of the problem, and we set specialty traps to target problematic squirrels using precise trap placements and innovative methods. We go the extra mile to set squirrel traps in proper locations on your home so that only the nuisance squirrels on your roof or gutter are being captured and removed.

A squirrel chewed this electric wiring and died in the attic.

Squirrels chew through rotted fascia to get into attics.

A squirrel will chew through gutters.

Is Your Duct Work Vanishing?

Ductwork is often damaged and used as nesting material which can cost you in heating and cooling bills as well as allow bacterial and fungal spores from the fecal matter and attic to enter your home.

Gutters have been destroyed by their ferocious gnawing on aluminum and can cost homeowners hundreds if not thousands of dollars in repairs.

We have even seen the tops of aluminum fence railing that has been destroyed by squirrel chewing and ruins the aesthetics of the fencing.

Squirrels carry many insects and parasites like fleas and ticks and become a host and vector for many diseases. These critters aren’t litter box trained and will urinate and defecate on your insulation, rafters, and attic access doors which can potentially cause serious health risks for occupants. Some of these diseases and funguses are Histoplasmosis, Leptospirosis, or Salmonella. Helpful Website’s About Squirrel Diseases are listed below.

The Squirrel Entry Was Located and We Performed A Squirrel Removal

We have both the knowledge and tools to get rid of your squirrel problem regardless of how simple or complex. Every one of our courteous, professional staff members is trained in squirrel removal, trapping, and control techniques as well as how to identify squirrels and prevent future squirrel damage to your home.

Barnes Wildlife Control is an animal control and prevention provider based in the Miami Valley region with offices in Beavercreek and Troy. For years, we have served individual homeowners, commercial business owners, property managers, and municipal customers dealing with squirrel problems. Below are some of the areas where we have helped customers deal with squirrel invasions in both homes and businesses. This list is not exhaustive. If you are located in Southwestern Ohio, please call us today at 937-340-1867, and our expert animal control specialists will be happy to assist you an answer any questions. We are proud to service Dayton, Ohio and Xenia, Ohio, and the surrounding communities. 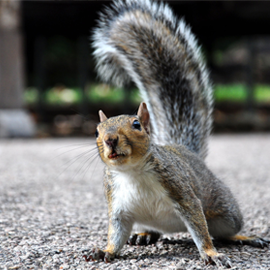 Squirrel Droppings Found in the attic insulation? Squirrel Damaging your Home? Asking “Is there a squirrel removal company near me?” You found us, call today!