Out of all the towns, cities, and municipalities we service, Vandalia, OH seems to have the largest population of coyotes and the most conflicts with coyotes. We believe this is due to the geographic location of the city as its surrounded by two large parks: Taylorsville Reserve and Englewood Metropark. The coyotes flourish in these parks as they have no natural predators and hunting is not allowed. These parks encompass Vandalia from both the east and the west.

Also on the north side of Vandalia sits Dayton International Airport, which also offers safe haven for coyotes as the Federal Aviation Association is not controlling their populations although we have heard of issues with coyotes on the airport runways.

We have successfully captured and removed hundreds of coyotes from Miami Valley cities such as Vandalia, Butler Township, Oakwood, Kettering, Centerville, Miamisburg and Springboro to name the most active areas. 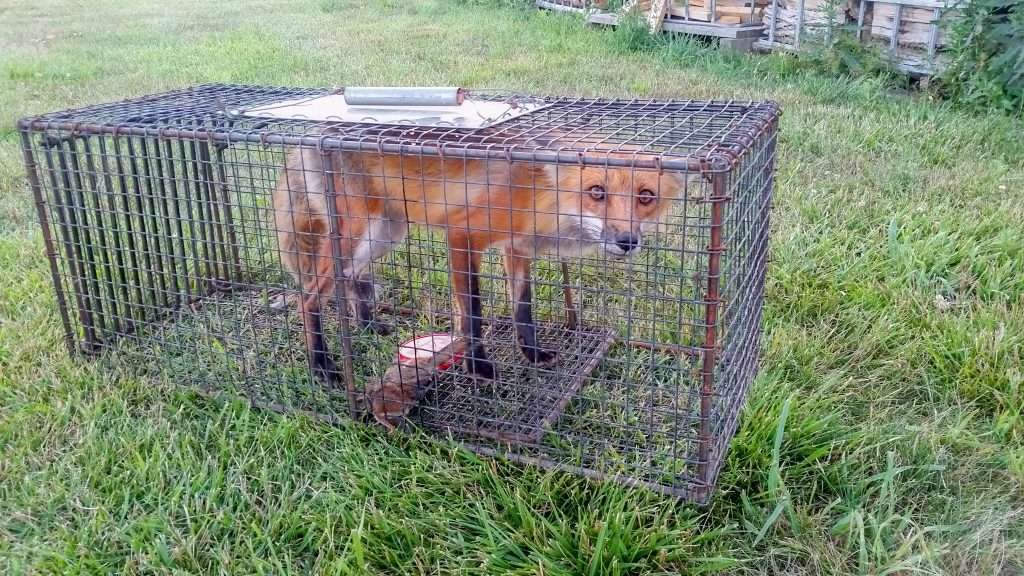 Need a fox trapper in the Miami Valley Ohio area? Barnes Wildlife control set a trap and removed this fox after it was found living under the deck.

Most complaints and reasoning for nuisance trapping coyotes and fox is from an incident where a dog has been attacked and the homeowners need help. Almost everyone now a days has some sort of shed or deck which makes suitable den locations for these varmints and provides opportunity for pet interactions between predator and prey.

Barnes Wildlife Control In The News!

The following complaints are quite common when Barnes Wildlife Control gets coyote or fox calls and we always have answers to your questions. So give us a call if you have a fox or coyote problem! We are number 1 at coyote removal and fox removal!

Have you spotted coyotes in your neighborhood? Coyotes are found in every one of Ohio’s 88 counties and have adapted to live among us inside city limits and rural areas. Over the last two decades, as coyote populations have exploded in southwest Ohio, red and grey fox populations have declined.

Coyotes are now top predators in the Buckeye State, and red foxes are competitors in their food chain, so they need elimination in the coyote’s eye. Coyotes also view domestic pets such as dogs and cats as threats to their food source and, if given the opportunity, will kill dogs and feral cats just for the sake of removing competition.

The main diet of coyotes in the Dayton area other than stray cats is cottontail rabbit, whitetail deer, voles, shrews, field mice, moles, grasshoppers, and occasionally will rummage through garbage. Coyotes rarely attack children or pets unless provoked, but it does happen.

The remaining red fox have survived on similar items as the coyote, except for whitetail deer. The main complaint we hear from Dayton area residents is that foxes are coming into the yard or barn and eating livestock such as chickens and ducks. 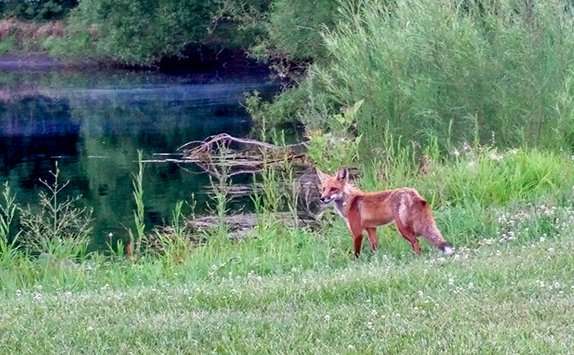 This red fox was caught in a trap next to the chicken coop just a few nights after this photo was taken.

A fox is extremely intelligent and can find vulnerabilities in your fence or pen to prey on poultry. Grey foxes are almost non-existent in southern Ohio and what remains is struggling to survive in the remote woodland areas of the state.

One benefit the gray fox has over the red fox is that it can climb trees to escape predation from coyotes, as the red fox cannot climb is often exterminated by packs of coyotes.

For more information on these canine predators in the Dayton area or to learn what Coyote Removal Services and Fox Pest Control Barnes Wildlife has to offer give our office a call at 937-340-1867.

Have You Spotted Coyotes In Your Neighborhood?

Coyotes are found in every one of Ohio’s 88 counties and have adapted to live amongst us inside city limits as well as rural areas. Unless provoked, coyotes rarely attack children or pets, but it does happen.

This coyote attacked a dog in Dayton and a customer called Barnes Wildlife for coyote exterminator services.

This coyote removal took place to protect the deer herd in the Tipp City /Huber Heights area. Coyotes kill a lot of newborn deer fawns, and studies show as much s 80% of deer fawn are killed by coyotes.

This coyote was trapped using a cable restraint trap after complaints of missing cats came into our office from the Vandalia, Ohio area.

I’m in need of your Coyote Removal Services in Dayton OH area! I see a coyote in my yard at night! Help, “Fox killing my chickens! A fox ate my ducks, and I need a fox trapper! Is there a Coyote exterminator near me? My dog was attacked by a coyote: do you remove coyotes?