Save Your Lawn From Mole Tunnels – Use Troy Mole Yard Removal Service!

Moles can cause different problems for your lawn or garden, as their tunneling leaves unsightly mounds of soil and may damage the root systems of your plants.

There are six main mole species found in North America. And, the most common is the Eastern mole, also called the grey mole. All moles can be damaging to lawns and gardens. Also, the extent of that damage depends on how habituated they are in the area. Their tunneling progresses over time. So, they could build extensive networks throughout different residences.

Let our experts handle your pest mole control needs. Contact Us Today If You Think You May Have Lawn and Yard Moles. 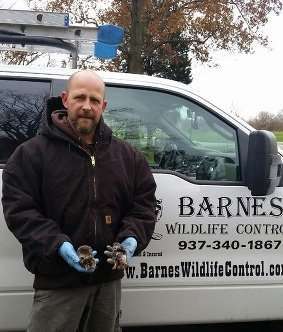 When you hire Troy Mole Yard Removal Service, we recommend the following. GET YOUR NEIGHBORS ONBOARD! Why? So we can trap and remove the moles from a larger area instead of a single lawn. This will provide your yard with prolonged mole control. Your neighbor’s moles won’t be around to tunnel over into your yard. We can offer neighborhood discounts for group lawn mole removal services. So, if a group of your neighbors decide its time to get rid of the moles – Call Us At (937) 340-1867 And Get A Group Discount!

Trapping is the most effective way to get rid of moles. This method requires careful planning and observation to determine which tunnels are active in order to set the traps more efficiently. Extensive knowledge of the animal’s behavioral patterns is a must an if you want to do it yourself download our Mole Yard Removal Trapping Removal Guide Here. We also sell complete Mole Yard Removal Trapping Kits

Mole populations can significantly grow if not handled early and properly. That’s why it is important to get rid of moles as soon as the tunnels are detected. Call us at (937) 340-1867 for our Troy Mole Yard Removal Service and we’ll take care of your mole problems immediately. 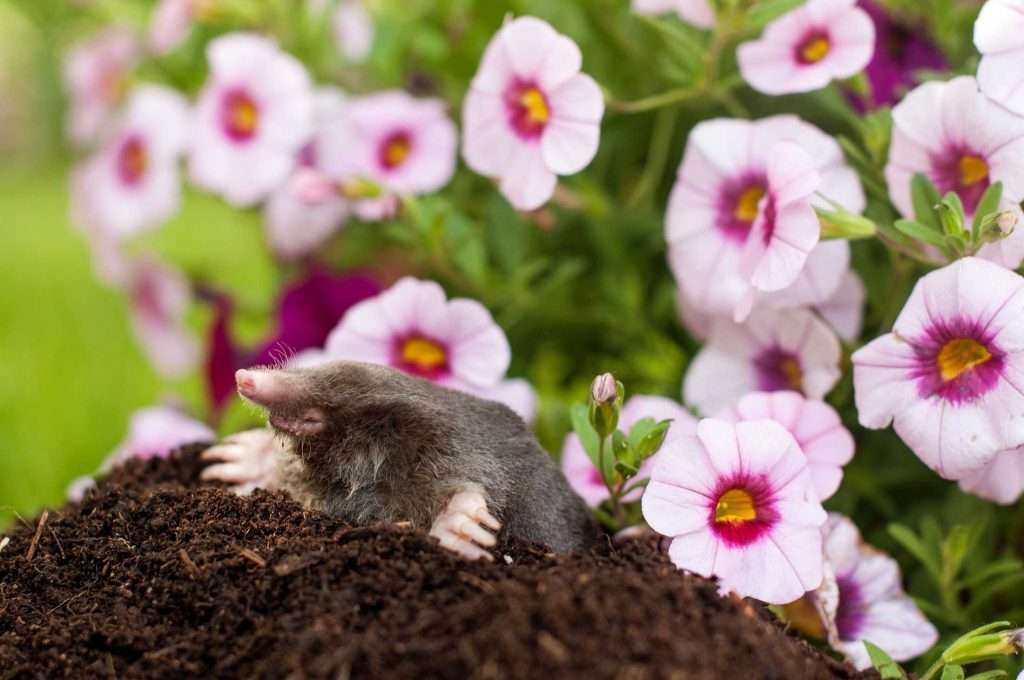 Are moles popping up in your flower bed? Let Troy Mole Yard Removal take care of your mole problem.

We provide safe and effective mole trapping & removal, and mole pest control services. If you have noticed piles of dirt popping up in your lawn and soft areas of sod when you walk in the grass you more than likely have moles in your yard. Moles will tunnel through your property causing damage to your lawn in search of food and as they roam around the yard large mounds of dirt will appear overnight. These piles of dirt appear when moles dig deeper into the soil where earthworms, night crawlers, grubs, and other larva feed as the moisture content is ideal for the moles food source.

Troy Mole Yard Removal Service uses these dirt mounds and other key indicators to form a plan of attack for each mole removal service project. We use only the most up to date mole removal equipment, traps, and techniques to take care of your mole yard removal problem with guaranteed success.

Common Complaints we Hear about Troy Lawn and yard Moles

We Are Experts At Removing Lawn And Yard Moles In The Troy, Ohio

The Eastern Mole is dark grey and weighs an around 3 ounces and can grow as large as 9 inches long. Moles breed in later winter and birth 1-5 young moles in mid spring time. Moles have high metabolisms as insectivores and are always active in search of their primary food sources: nightcrawlers, earthworms, grubs, insect larva, cicada worms, and redworms (Moles don’t eat fake Talprid Worms or Poisons). 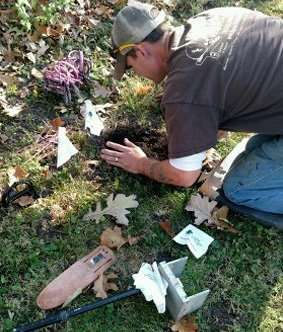 We’re doing a search through a mole mound.

Do you see moving grass?

If you sit looking at your yard long enough you may even see your grass moving as the dirt below is being excavated and traveled by moles in search of food. Mole tunnels are mostly underground and some near the surface feel squishy under your feet almost like walking on a mattress. Oftentimes we catch shrews and voles using the tunnels made by moles.

Do moles live with other moles?

Moles generally do not get along with other moles. Moles will fight to the death if another mole enters their territory but not if it is a female and mating season. 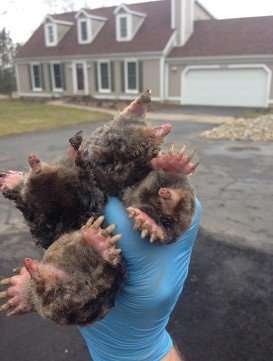 Mole trappers have caught up to 12 moles in a 10-foot square area within 3 weeks and many times we have caught 1 or 2 moles before we even leave your property. On average we set between 12-20 mole traps in a normal size yard which takes about 1-2 hrs to complete on the initial visit.. Observations made by Donald and Lillian Stokes in their book, Animal Tracking and Behavior 1986 state the following:

“Moles are believed to remain solitary as adults and avoid contact with other moles. However, there are at least two exceptions. One occurs in the spring, when the males start to move around and leave their range in search of females. They may move about for several weeks, even after all the females in an area have mated. The other exception is that occasionally some tunnels are used by several moles; these tunnels are, in a sense, like highways. This communal use suggests that the social system of moles is more complex than we think.”

Troy Mole Yard Removal Service has decades of mole trapping expertise and we have found that the above observations made by Stokes are mostly true but we have witnessed several instances where we have caught up to 4 moles in the same exact location within a couple days. This indicates that although the moles are generally unsocial, they will group together if the food source and conditions allow for high populations of moles.

Please take the time to check out Our Blog Post On Our Miami Valley Mole Trapping Service for an interesting story  about one of our grateful clients.

Now that we know more about the Eastern Mole, you may be able to better understand what the tunnel through your yards is from, i.e. a mole in search of food. When walking over these tunnels the ground can collapse below your feet and mowing grass around these tunnels is also a problem. These mole tunnels damage the aesthetics of your landscape, damage flowerbeds, and kill the grass. Mole Hills, a large pile of fresh dirt in the grass, happens when a mole excavates the dirt from their tunnels.

Moles are capable of tunneling over half a football field per day which can turn a well-manicured lawn into a Caddy Shack nightmare in just a few days. If you notice mole activity and these piles of dirt showing up throughout your yard, you need to call Troy Mole Yard Removal Service and ask for our mole removal services.

VIDEO: How Hard Do Moles Dig? ScienceTake At The New York Times

DO NOT think that the poisons sold on Amazon, Walmart, Lowes, Menards, or Home Depot will solve your lawn and yard mole problem. These are gimmicks and do more harm than good not to mention a waste of your money. The only proven method to get rid of moles is through mole trapping, habitat modification, and prevention methods. Moles will not respond to repellents such as music, mothballs, ammonia, or exhaust fumes.

Moles will not be deterred by coyote or dog urine or any other ultrasonic windmill contraption. We have seen time and time again where these futile methods have failed and homeowners resort to having them trapped. Call (937) 340-1867 for Troy Mole Yard Removal Service for your local, family-owned, professional lawn and yard mole removal.

Moles tearing up your Yard? are moles destroying your plants and garden? Are you tired Of looking at mounds of dirt on your beautiful lawn?