Beaver Removal Service Is What Barnes Wildlife Control Does Best!

Our Beaver Removal Service is what Barnes Wildlife Control does best! The American Beaver is the largest, North American rodent. Beavers are large mammals, that are capable of causing much damage to river and creek systems and that’s why we offer Dayton Beaver Removal Service & Control. Beaver ponds create habitat for muskrats, fish and other creatures. In addition, they accomplish this though by slowing water from drainage systems, changing the normal silt disposition. Beavers use softwood trees, to build their dams, lodges, and to chew on. They constantly cut down trees, on average, one beaver cuts down no less than 200 trees a year and beaver removal services are often needed. This is a staggering number, that drastically decreases worth, and resources from a homeowner’s property and beaver removal services are available.

Beavers Are Wonderful Animals, But…

Yes, beavers are wonderful animals, when they are out in nature, and on preserves not damaging individual’s property.  But, beavers like all animals, when overpopulated become at risk for extinction of large colonies.  This occurs when their population becomes  greater than nature’s resources can support in a given area. So, by carefully limiting and monitoring their population, and preventing them from becoming overpopulated, helps ensure their future generations and habitat. Ohio Department on Natural Resources shares laws and regulations on how to handle beaver removal projects legally at their Ohio Hunting And Trapping Regulations Page.

Beavers Also Can Carry Rabies And Other Diseases

Beavers also can carry rabies, along with many other diseases, and should not come into contact with humans and pets. They also can often cause public roadways and highways to become dangerous and impassable. When not kept in control beavers can cause flooding over roads, yards and even houses. Flooding from beavers can also ruin crops and destroy acres of farmland. They often block canals, culverts, pipes and other irrigation and water drainage systems. They also cut down many valuable trees. Also, after being cut down many never get used in the construction of their dams and lodges. Beavers also flood large areas of trees that die after being under water for an extended length of time.

Our Beaver Removal Service uses a variety of techniques to control the beaver population, and will solve the problem. Barnes uses Modern humane methods of removing and/or relocating the animals causing the problem. Our methods include beaver snares (cable restraint traps) and Conibear (body-gripping 330 size) beaver traps. We also use water cage traps, and long-spring leg hold traps set on drowner slides. Have a beaver problem? You can also visit our beaver removal service page here. Or, call now at (937) 340-1867. 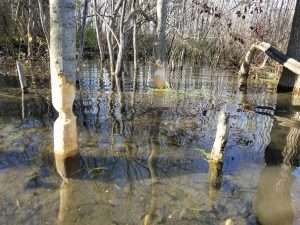 Dayton Beaver damage due to chewing on trees.