Removing Bats From An Attic In Mason Ohio 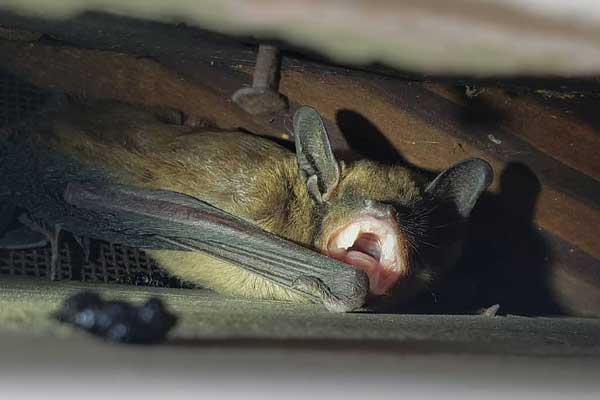 “Help, We Have Bats In Our Mason Attic”

Recently Barnes Wildlife Control received a call requesting our help removing bats from an attic in  Mason, Ohio. The panicky woman we spoke with stated that a bat was flying around her living room but kept landing on a hatch providing access to her attic.

Each time her husband, equally scared of bats as his wife, approached the bat hanging from the hatch, it retook flight, causing panic in the house. When her husband remained away from the hatch, the wife said the bat returned and managed to squeeze through a small gap, allowing the bat into the attic space above.

We get some calls regarding removing bats from an attic during colder times of the year. The Mason, Ohio bat call came in as cold weather approached the area, and that’s when bats are searching for a warm, secure roosting site. Bats can locate any vulnerable gaps in a building where heat pockets exist, like unscreened gable vents and chimneys, building gaps along fascia or soffits, and holes in siding.

Since I’m an on-the-ground owner of Barnes Wildlife Control, I decided to go with two other crew members of my expert bat removal team members. So we packed up the truck with all our state of the technology bat removal equipment necessary for what we suspected would be removing bats from an attic in this Mason home.

Barnes Wildlife Control has an extensive fleet of vehicles ready for any job demanding removing bats from an attic.

Setting Up Safety Measures Around The Attic Hatch Before Entering Attic

Once we arrived at the Mason home, I met this wonderful welcoming couple. They were relieved our Mason bat inspection crew had come so quickly, which we make every attempt to do on any call we receive regarding bats flying inside a home.

I informed the couple that bats roosting in an attic of a home could create some potential health issues as well as bats escaping into their living area as they had experienced earlier. So, before going into the attic, we explained that we needed to set up a barrier around the attic hatch and our ladders since we did not want bats flying through the hatch and into the living quarters. We also addressed potential costs and they were agreeable. They just wanted the bat or bats out, period!

Our bat removal management team gathers together for more training on some new science and technology regarding bat control. Barnes Wildlife Control is second to none in our bat expertise!

Our Crew Would Be Removing At Least One Bat From An Attic. But Would There Be More Bats?

Getting into the attic via the attic hatch posed no problem since the hatch was quite large and had an attached telescoping ladder. The attic was not well lit though there was an attic window through which a bit of light entered. We were surprised that many relatively well-organized items were in this attic, and the attic was dusty but not filthy by any means.

We immediately noticed a slight odor of bat guano and urine which suggested more than one bat and that we would be removing bats from an attic that provided a great roosting site for a colony. Also, wood flooring covered more than half of the attic, while the other floor section was open with a thick insulation layer which might have signs of bat guano if the wood flooring didn’t.

As the two of us moved about, we spooked a bat that flew into a corner of the attic where the roof met the attic floor. As I got a few feet from the area where the bat entered, I got to my knees, pulled out my flashlight, and directed light into the corner gap. The first thing I saw was the sharp white teeth of a Big Brown Bat and a bit of guano in front of it.

Since we document what we uncover on a bat inspection or any wildlife inspection, I snapped a photo of the little brown. Another perfect shot for our portfolio of bat photographs of our adventures when removing bats from an attic.

Here’s the great photo of the Big Brown Bat we believe flew into the customer’s living space but we could not be sure.

Removing Bats From An Attic Is Not A DIY Project And Should Be Left To Bat Experts Like Those At Barnes Wildlife Control.
Call Today At 937- 340 -1867.

Discovering A Small Colony Of Bats

So we knew we would have to exclude this one bat since we do not remove bats by hand since we want to prevent bat injuries. More on the bat removal process later in this post.

We could see there were no gaps that a colony of bats might enter and roost between the walls. Plus, the attic was well-maintained structurally and all the walls and the attic ceiling were easily inspectable. As we continued our exploration, I followed the scent of bat guano and urine, looking for bat guano droppings on the floor while Shawn looked for bat access points into the attic.

As I got closer to some bamboo curtains hanging from a wall, I noticed bat guano in the insulation below. At that point, my experience from removing bats from an attic told me I might find something behind the curtain. I slowly unhooked the top of the curtain, which had some plastic underneath, lifted the plastic, and there was a small colony of 10 to 20 Big Brown Bats clustered together. Fortunately, being gentle and carefully removing the curtain and plastic, not one bat moved out of place other than adjusting themselves a bit and squeezing closer together, preserving their body heat. 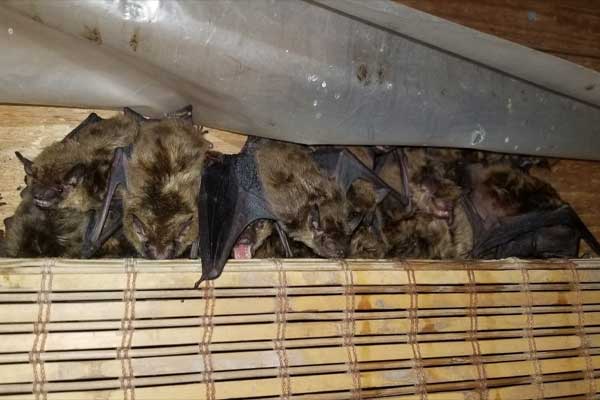 This small colony of Big Brown Bats we discovered in this Mason attic meant we would be removing bats from an attic and not just one. After further exploration, we knew this small colony was the only one in the attic.

We Do Not Exterminate Bats, Which Is Illegal! Plus, Bats Contribute To Ohio’s Ecosystem!

Discovering Bat Entrance Points Before Removing Bats From An Attic

Now that we knew we had more than one bat in this Mason, Ohio attic, we started our home inspection outside to locate how the colony had entered the attic. But, finding bat entry points demand an excellent eye, knowledge of bat behavior, and especially plain old real-world experience which is the hallmark of Barnes Wildlife Control.

We needed to remove Big Brown Bats with a pliable membrane tied to low mineral content articulated bones. These characteristics provide the bats with a super flexible skeletal structure allowing their bones to compress through gaps as small as 18 mm. Plus, these bats have very oily fur, which leaves dark greasy stains on the surfaces it touches, often indicating a nearby bat entry point.

During our two-hour bat entry search, we were able to find two access points: one below a fascia board that met the brick homes wall and another between some newer brickwork and vinyl under-siding. We chose to seal and repair the opening below the facia board before employing our favorite tool for removing bats from an attic, the Bat Valve on the other opening.

The above is an example of one of the two bat access points we discovered that led to the attic. Notice the dark stains from the bat’s oily fur.

Removing Bats From An Attic Using The Bat Valve

Removing bats from an attic works more effectively and efficiently when the proper tools are at hand. We chose the One-Way Bat Valve in this bat colony removal situation we were facing. Ohh, just a quick mention: Barnes Wildlife Control’s owner, Jacob Barnes, invented the Bat Valve! This bat removal device allows a bat to move through it harmlessly, but it cannot return. Plus, while on a building, The Bat Valve’s logo and green lettering look pretty cool!

Once installed, we leave The Bat Valve on a building for a number of days. During that time, bats will leave the roost at dusk, searching for food. Once bats return to reenter the roost, they can’t reenter through the One-Way Bat Valve. When no more activity occurs through the Bat Valve, this generally indicates the colony is gone.

We happened to install the Bat Valve on a relatively warm fall day in the early afternoon. Plus, the predicted weather was calling for warm weather all week, which meant the bats would be leaving the roost hunting for some tasty flying insects.

Though not all bats feed every evening, all must eat and will leave a roost eventually, and in this case, have to leave through the Bat Valve since we had sealed the other access point.

The Bat Valve TBV-SG was the perfect One-Way Bat Exclusion device for removing bats from an attic, in this case, the attic with a roost of a small colony of bats in this Mason, Ohio attic.

Finishing Removing Bats From An Attic In Mason, Ohio: The Cleanup

Cleaning up after a bat infestation can be one of the nastiest wildlife cleanup jobs other than a desperate pregnant female raccoon getting wanting into an attic where it can cause thousands of dollars of destruction. In this case, the mess created by this small colony of bats consisted of guano peppered into some insulation and a small pile of bat guano below the roosting site.

Our cleanup crew bagged up the soiled insulation and guano pile on the floor, then vacuumed up some guano peppered around the attic’s wooden flooring. We washed the floor and part of a wall where the bats had roosted with a disinfecting agent, then fumigated the area with a biodegradable fogging agent, which permanently removes any odors left by the bat’s urine and guano. The finishing touch was adding a bit of white insulation to replace what we had removed.

Lest we forget, we also removed the bat valve from the outside of the home and sealed the gap so the bats could not get back inside, which generally the bats attempt to do for a few days hoping they can return to their former roost.

After every removing bats from an attic job, there is some form of cleanup. In this case, cleanup was relatively easy.