What Insect Am I?

News Flash – Insect Attacked Ohio Home! I live in a kingdom, or more precisely, a colony, my colony has workers, soldiers, males and females that reproduce. You may think I am an ant, but I am closer to the cockroach family, although I am very, very, small. Who am I? A Termite! And, a wood eating insect that becomes a home eating insect if left alone!

Although termites are very small, they can do a huge amount of damage as a wood eating insect! Anyone who has had termites visit their house can testify that termites do not bring good tidings. And the headline “Insect Attacked Ohio Home” will ring true if left to their own devices! Termites chew right through trees, anything wooden, any wood in your house, especially if the wood is damp. Your home could be vulnerable to termites, which brings us to a home that had a termite infestation. 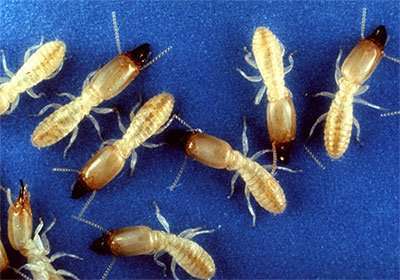 News Headline – Insect Attacked Ohio Home. Termites show no mercy if they get inside your home!

Termites attacked and destroyed foundational wood, wood supports, and other wooden exterior material on the house. The home owner did the only thing they could do, they called Barnes Wildlife Control! Barnes Wildlife came, and with them came a solution! This home wood eater would not stand up to out tools of the trade! Also, we made the headline read “Insect Attacked Ohio Home – Barnes Comes To The Rescue!”

Barnes Wildlife Control trenched around the outside base of the house, and sprayed termite killer within it.  They also drilled holes in the concrete material, and in the concrete porch/patio. They sprayed insecticide there, and inside the base of the house. In addition, Barnes Wildlife Control implemented a solution to further progress the termite extermination, the team placed termite bait stations underground to kill, control, and monitor termite activity. What an outstanding job, and solution, by the Barnes Wildlife Control team! So, the old headline  “Insect Attacked Ohio Home” Became “Insect Destroyed – Home Recovered.”

Barnes Is Not Restricted To The Ground – We Do Antenna Removal

Barnes is not restricted to the ground though, during a recent bat job an onlooker asked Barnes Wildlife if they could take down a tall metal antenna tower that had fallen against his house. Not only is this a sore sight, it is also potentially dangerous to glass windows and passerby’s. Also, critters such as raccoons, climb towers like this to gain access on or in a home. So, Barnes Wildlife Control used their lift to raise right up over the top of the two-story home to take down and apart the tower, and to repair where it had impacted the side of the house. Wow. Tough luck finding another wildlife control company like Barnes Wildlife. 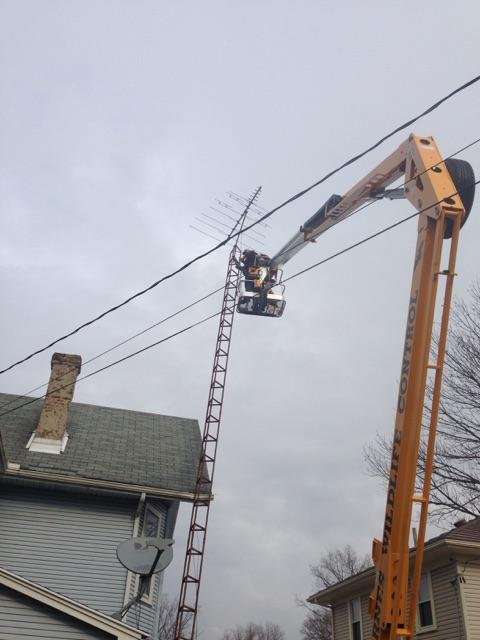 Barnes Wildlife Control used their lift to raise right up over the top of the two-story home to take down and apart the tower, and to repair where it had impacted the side of the house.